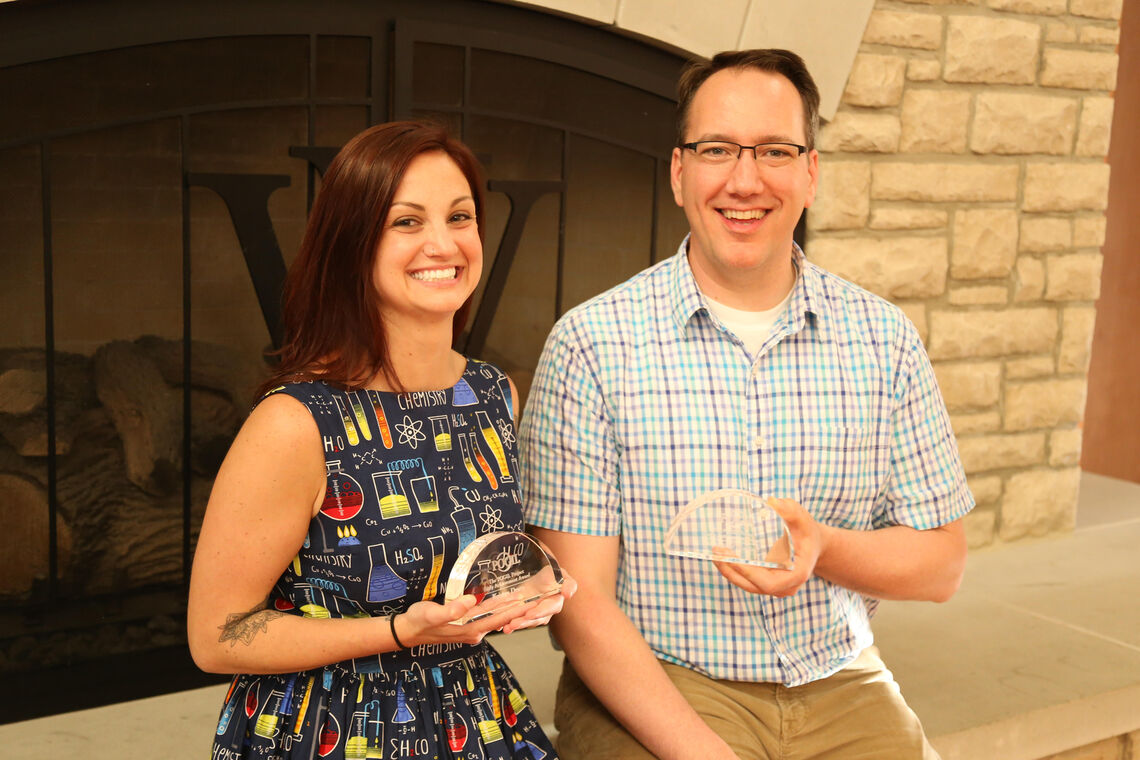 The award, given to one secondary and post-secondary winner, honors POGIL practitioners who are new to The Project and who have distinguished themselves by advancing the goals of The Project and who have an exceptional level of enthusiasm for active learning.  Other criteria include leadership in The Project, active participation in disseminating the POGIL pedagogy, and other service to The Project, such as workshop facilitation, authorship of activities, and participation in grant proposals.

Drury and Mayfield were honored at The POGIL Project's National Meeting in St. Louis in June 2019, and were each presented with a plaque and a cash award.

"I am excited to honor these two outstanding educators as recipients of the POGIL Early Achievement Award," said Project Executive Director Rick Moog.  "Both Kristen and Chris have had a strong impact on the POGIL community and have contributed greatly to the growth and success of The Project."

Drury is a Regents and Advanced Placement Chemistry Teacher at William Floyd High School, located on Long Island in New York State. She is a New York State Master Teacher Emeritus, a New York State Teacher of Excellence, and the American Association of Chemistry Teachers High School Teacher of the Year. Kristen utilizes a flipped classroom in order to provide more time in class for inquiry style learning. The POGIL method has been an integral part of her teaching style. Kristen's passion for guided inquiry learning and the POGIL philosophy lead her to become more actively involved with The POGIL Project by attending a facilitator training, training colleagues at various New York Universities, national chemistry conferences, and POGIL Summer Meetings, as well as coordinating a network of POGIL mentors to help new and aspiring teachers implement POGIL in their classrooms. Her commitment and enthusiasm for chemical education can be described as motivating and contagious.

Chris Mayfield, Ph.D., is an Associate Professor of Computer Science at James Madison University. His research focuses on CS education and professional development, particularly at the undergraduate and high school levels. He is Co-PI of the IntroCS-POGIL project (NSF DUE 1626765), which studies the adoption of Process Oriented Guided Inquiry Learning in first-year programming courses. Chris has published in a variety of CS education conferences and journals and has facilitated many workshops on evidence-based instructional practices. He is coauthor of the textbook "Think Java: How to Think Like a Computer Scientist" and has written dozens of POGIL activities.  His nominator said, “he has become a passionate advocate for POGIL in his own classes, at his institution, across the CS discipline, and in STEM education more generally. He implements POGIL, authors and shares activities, facilitates workshops, writes proposals, leads projects, and participates in national POGIL events.”

The POGIL Project works with educators to disseminate its unique pedagogy at the secondary and college levels through professional development workshops around the nation, as well as to produce POGIL curricular materials for both high school and university classrooms. POGIL stands for Process Oriented Guided Inquiry Learning, a student-centered, group-learning instructional strategy and philosophy developed through research on how students learn best. (www.pogil.org)