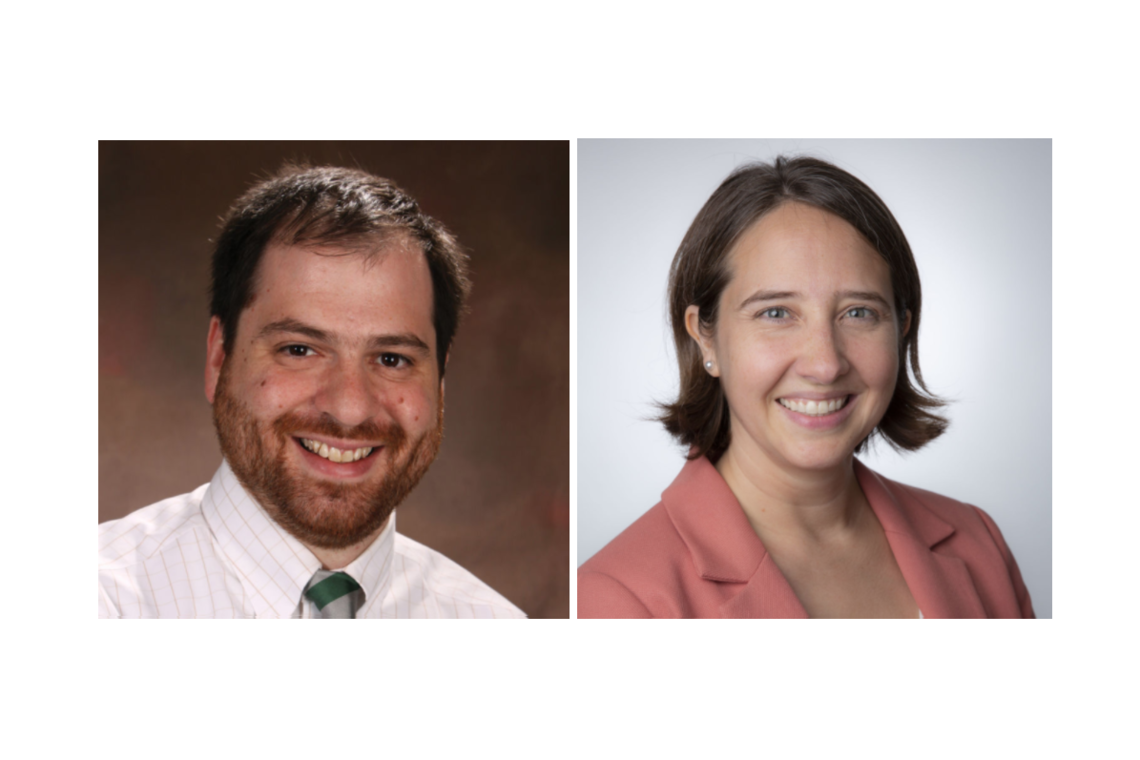 The award, given to one secondary and post-secondary winner, honors POGIL practitioners who are new to The Project and who have distinguished themselves by advancing the goals of The Project and who have an exceptional level of enthusiasm for active learning. Other criteria include leadership in The Project, active participation in disseminating the POGIL pedagogy, and other service to The Project, such as workshop facilitation, authorship of activities, and participation in grant proposals.

Bruno and Plessel will be honored at The POGIL Project's upcoming National Meeting in St. Louis in June 2018, and will each be presented with a plaque and a cash award.

"I am excited to honor these two outstanding educators as recipients of the POGIL Early Achievement Award," said Project Director Rick Moog. "Both Michael and Kristin have had a strong impact on the POGIL community and have contributed greatly to the growth and success of The Project."

Bruno grew up in Connecticut, and received an A.B. in Chemistry from Dartmouth College and a Ph.D. in Biochemistry from Cornell University. At Cornell, he studied changes in membrane elasticity caused by polyunsaturated fatty acids. As a post-doc at the University of North Carolina – Chapel Hill, he studied the role of membrane curvature on synaptic vesicle fusion. At UNC he was a fellow in the SPIRE fellowship program, which combines research support and community service with an emphasis on minority careers in academic science. It was as a SPIRE fellow that he became interested in active learning. He was first introduced to POGIL as an Assistant Professor of Chemistry at Guilford College. He is currently an instructor of chemistry at the North Carolina School for Science and Mathematics, a public residential high school for talented students, where he uses POGIL to teach chemistry and biochemistry, and has introduced the practice to many of his colleagues who now incorporate the pedagogy into their own classrooms.

“It is an honor to be recognized by my peers by receiving the PEACH Award," said Bruno The POGIL Project provides a unique opportunity for secondary school instructors to interact with faculty from higher education on a national level, as peers and equal contributors. It is a tremendous privilege to be acknowledged by my colleagues in the POGIL Project and to have the continued support to pursue and improve on student-centric learning.”

Plessel is a Nebraska native that has been transplanted to Wisconsin. She earned a B.S. in Chemistry from the University of Nebraska-Lincoln and her Ph.D. from the University of Wisconsin-Madison. She joined the UW Colleges’ Rock County campus and chemistry department in 2010, and currently serves in the positions of Associate Professor of Chemistry and Institutional Assessment Coordinator. As a graduate student, Kristin was introduced to POGIL, which she immediately applied once she acquired a classroom of her own. For her use of POGIL in the classroom, she was recognized with the Arthur M. Kaplan Fellows Award, the Gil Sedor Excellence in Teaching Award for UW Rock County and the University of Wisconsin System’s 2016 Alliant Energy Underkofler Excellence in Teaching Award. Creating POGIL practitioners and supporting their professional development, alongside serving her own students, have been her professional passions. Her personal passions include traveling with her spouse and two children.

"I had already felt like a winner just being a part of the vibrant and varied POGIL community, said Plessel. "In fact interactions with the POGIL practitioners are often the highlight of my week. Being honored from among this remarkable company, by individuals for whom I have considerable respect, is both humbling and overwhelming. "

The POGIL Project works with educators to disseminate its unique pedagogy at the secondary and college levels through professional development workshops around the nation, as well as to produce POGIL curricular materials for both high school and university classrooms. POGIL stands for Process Oriented Guided Inquiry Learning, a student-centered, group-learning instructional strategy and philosophy developed through research on how students learn best.