How POGIL Changed Me as an Educator 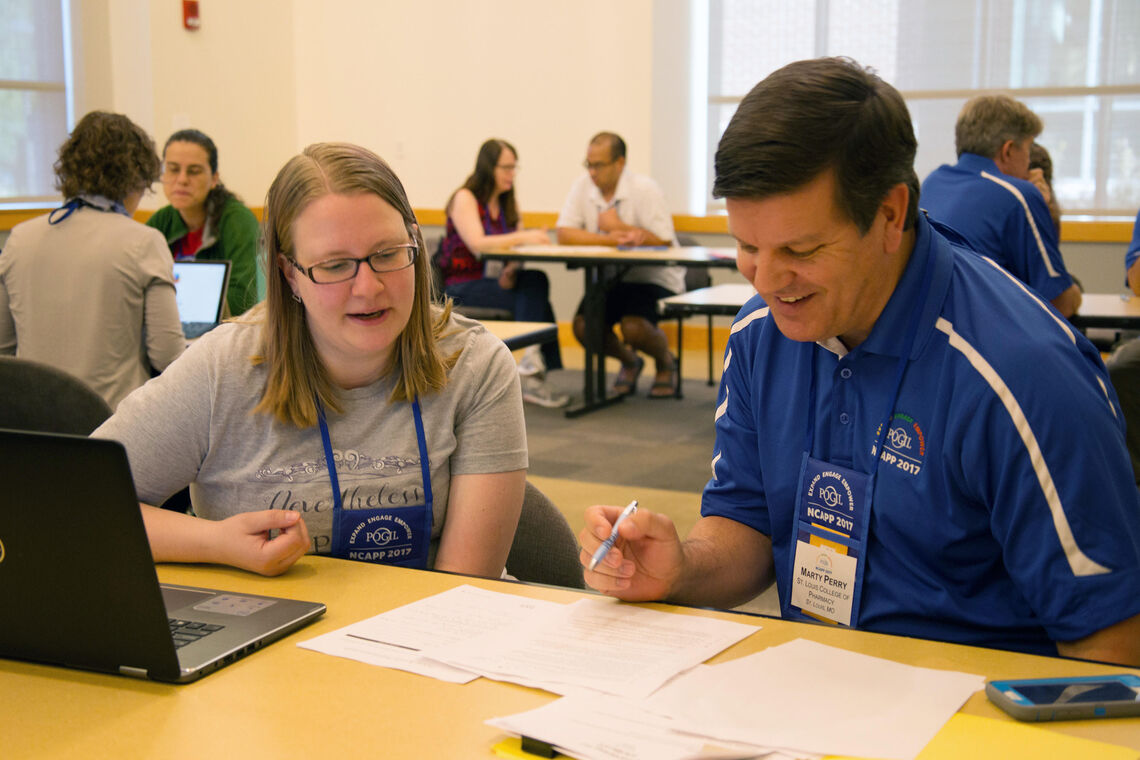 My first semester as a “professor” left me asking why I signed up to do this and that there must be a better way to teach my students.

Let me back up – I am a professor at the U.S. Coast Guard Academy, a place where the students are extremely focused, respectful, and always show up to class unless they have an excusal that was approved by the instructor.  In fact, they are so respectful that if you are boring enough that they are falling asleep they stand up to stay awake because what you have to say must be important – otherwise the Coast Guard wouldn’t have told them to take the class.

I would carefully prepare each lecture coming up with relevant examples that would engage them and problems that I would work step by step on the white board so they could learn how to solve it for themselves.  At the end of the semester, I barely knew their names and by the end of the 50 minutes, half the class would be standing.  I was disillusioned with “teaching” to say the least.  I knew there had to be a better way!  I started reading the Journal of Chemical Education and what I found were some articles on POGIL and how it was more effective than traditional lecture.  I decided to try teaching using POGIL…and everything changed. Most important, my students were staying awake!  The epiphany that I had was that everything had been about “I” up until now.  POGIL changed that to be about what the student was doing and how the student was learning.

I subsequently went to a summer workshop to learn how to implement POGIL in my classroom.  It was very informative, although I am sure I came off as a skeptic.  I wanted to figure out all the barriers to implementation that I would face and make sure that I didn’t hit any unforeseen roadblocks.   I came back from that experience convinced—I was all in, and soon, my students found they were too!  Even better than that, I was now part of a community that would support me and mentor me through my first years in becoming a skilled facilitator of student learning.

That second year was a totally different experience for me—instead of a roomful of sleepy, standing students, I now had a community of learners who relied on each other.  Everyone was engaged and the students were awake in class; they were having meaningful conversations and vocalizing what they were learning.  The same amount of material was covered as was in the traditional lecture classes, but noticeably, on the common assessments, the students were performing at a higher level.  It was no longer all about what I did in class but instead about the students’ learning.

My preparation to facilitate that learning was just as important – I was just doing it more effectively.  The best part was that you could see and sometimes hear the students constructing their knowledge in class.  One of my favorite lessons each year is teaching electron transitions in the hydrogen atom and the photons of electromagnetic radiation that gets emitted when they transition down.  The students reach a certain place and I hear them get stuck at the same point – it is then that I ask a simple question and every time, you can literally hear one or more people in the group say “ohhh” as their eyes get big.  I simply say, “now explain that to the rest of your group,” knowing that they had constructed the knowledge and “learned” the objective for the day.

Fast forward a decade later and I have been using POGIL the entire time.  My students are engaged and I interact with them on an authentic level.  I know that I am developing the whole person in the classroom and chemistry is simply my medium for doing that.  Better yet, they learn more chemistry and leave my class better prepared to be the future leaders of the U.S. Coast Guard thanks to the process skill development that takes place with POGIL.  Developing these skills benefits them in carrying out the missions of the Coast Guard and serving the American people.