Michael Bruno knows how important the role of mentorship is to a new faculty member or teacher—he's seen the effects mentorship has had on his own career.

Bruno, who now teaches at the North Carolina School of Science and Math, started his teaching career down the road at Guilford College. In the chemistry department there, he worked with veteran POGIL facilitator Gail Webster, who sent him off to his very first POGIL workshop.

"I like to joke that I was forced to do this, and in a sense I was, but I was really blown away by the workshop and by the rigor of the pedagogy," says Bruno.

"In the first couple of hours, you're doing POGIL inquiry and process-oriented work while you're learning what it is. I thought, "Oh, they fooled me. I'm doing this," Bruno continues with a laugh. "I was engaged the whole time. If this was working on me, even knowing what was supposed to be happening, this must work with students," he remembers thinking.

As he transitioned from teaching at the college level to teaching high school students at North Carolina's state-wide magnet school, the POGIL community was there to support him.

"I had gone through several regional workshops, and I'd gone through facilitator training," Bruno recalls. "I had met both high school and college teachers, so I knew POGIL was being used at all levels."

The exposure to an active learning method that generated great results in the classroom gave him the courage to take a risk during his interview at NCSSM, he says. "I interviewed with POGIL," says Bruno. "I think it was a bold move. Without knowing, without having the data from the community, without having all the support from the community, I wouldn't have been as confident," he adds.

With new activities under his belt and a supportive dean, Bruno landed the job. But teaching at a state-wide magnet school has challenged Bruno to re-think the structure and content of his POGIL activities. Although his students operate at a consistently advanced level for high schoolers, they still need more instructional support, says Bruno.

"All of our students were at the top of their high school, in terms of grades and ambition," Bruno explains. "We have students who are struggling and upset that they're struggling, or who are bored and need to be challenged. Not only do they have different academic abilities, but each one also has a unique academic background. Evening that out can be both challenging and successful with POGIL."

Bruno knows his high school students are the exception; classroom management is easy, thanks to the nature of the institution. "When I talk to other high school practitioners, my challenges are a walk in the park," says Bruno. "I have none of the discipline challenges that you would find in high school. My challenges are overly ambitious students who are clamoring for a good grade."

For a high school teacher, Bruno's background is also relatively unusual. He graduated from Cornell University with a Ph.D. in Biochemistry and Structural Biology, and taught as a postdoc at an HBCU, where he received extensive training in teaching minority populations.

As a new member of POGIL's diversity and inclusion team, he's excited to put his old background to use. "It goes all the way back to my beginnings teaching through the SPIRE program at an HBCU," says Bruno of his committee work. "I'm excited to continue that engagement with diversifying the students and faculty who are exposed to POGIL."

"It's important to me that this community stays active," Bruno says of his desire to make a bigger contribution to the organization. "The support of this community is integral to me continuing to use this practice." He knows other teachers need the same support.

Bruno has been involved with POGIL long enough that he recognizes it's time to take on new roles within the organization itself. Last year, Bruno won the POGIL Peach Award for early achievement in teaching. Next year? He's considering how he might help the next generation of POGIL facilitators, just as Webster helped him.

"Being the mentee is easy," says Bruno. "Stepping up to the national level and playing the role of mentor in the community is a little scary, but that's the evolution." 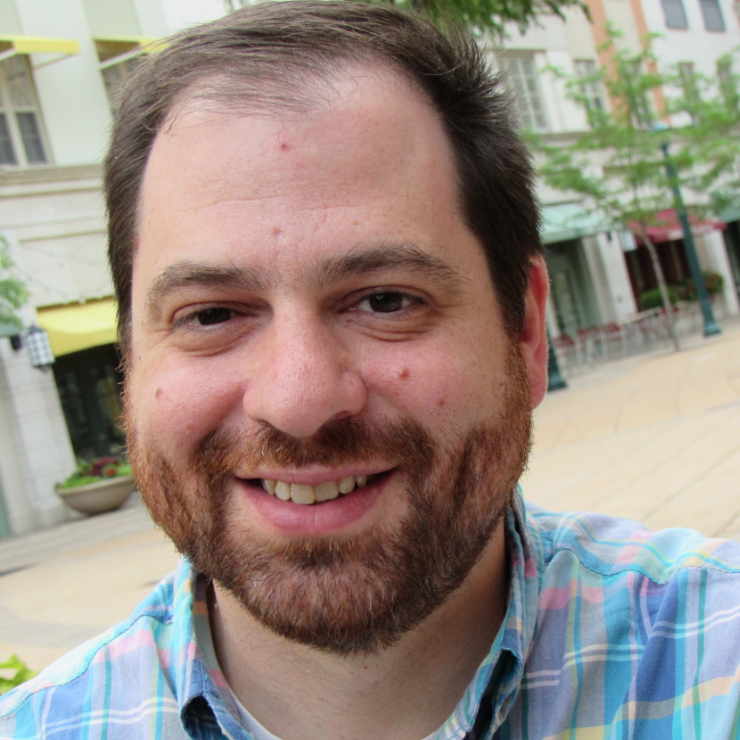 "I was really blown away by the workshop and by the rigor of the pedagogy" -Michael Bruno, teacher at North Carolina School of Science and Math